Runner of the Fortnight– Sameer Gaikwad 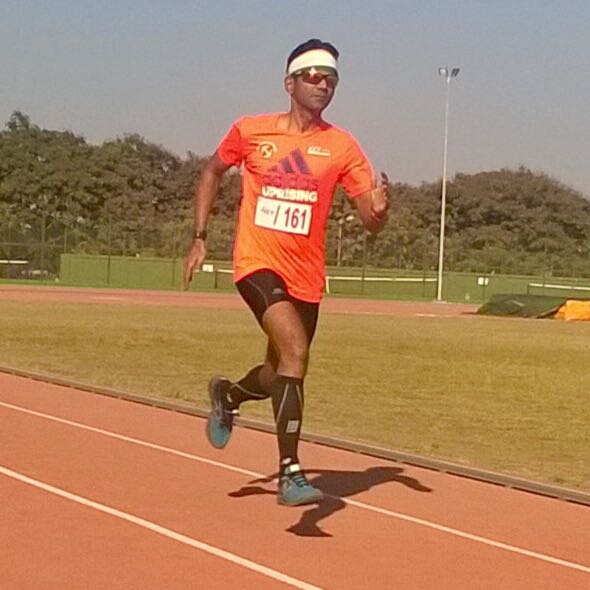 Running and Sameer Gaikwad well both are synonym to each other. Solefest 3.0 starts with Sameer Gaikwad who will feature as the first runner of the fortnight for Solefest 3.0, Daudo Dil Se. So here we will be asking Sameer his journey as a runner and what he would like to tell all the wannabe runners…

Solefest: Sameer if I remember vividly, you are one of the members who brought together the runners of Baroda under one common umbrella?

Sameer Gaikwad: I think the need for the runner community of Baroda to come together for a common good was felt by most of us who bumped into each other at some running event or other (those days, sparingly). We saw the runner’s self-help groups elsewhere around the country using social media. So it was a common feeling that the running, training and learning will be more than the sum of its individual parts when done together. Also the pitfalls / learnings from established runners will act as an informed guide to the newly inspired runners.

During those days, interest in HMs was catching up in tier 2 cities like ours. Mumbai, Delhi, Chennai and Bangalore had established themselves on the running circuit. Baroda also had a few experienced runners who had run there and even some international ones (Comrades) but their training was mostly solo and one could count these insane people running on roads on your fingertips. By coming together over email (pre-Facebook days) some tips were shared and eventually Facebook group and then Whatsapp made it easy to build a local community of interested runners who shared all their tips and experience about running, events and training.

SF: Sameer tell us something about your running journey, the challenges you faced and how you overcome it?

SG: To be frank, I was nowhere connected with any sport or athletics or running during my growing up years. I did dabble in badminton in my late teens for about two years – that was the closest I got to any sport. It did however help instill discipline. Besides, I used to commute by a cycle in Mumbai (where I grew up and completed my graduation). From home to college it was about 8 kms one way. Everything changed once I became a part of corporate life since 1989 and for about 20 years life was focused around work and family.

2009/10 was a clarion call when I realized I wasn’t fit enough (was at least 15 kg overweight). After recuperating from an ankle ligament tear, regular walking was recommended though even a km was a mental torture. That’s when I started to jog a few meters to break the monotony and slowly increased the distance interspersed with brisk walking. In about 6 months’ time I could jog for 20 mins of the time and walk only balance 10mins of the 30 mins allocated for this fitness activity. A 5 km run during a city event in 2010 was exhilarating since I could complete it nonstop in less than 40 mins. This began a love for running which peaked up during some local marathon season during winter (notably the IMA event in Baroda,  Surat HM and Vadodara HM). During rest of the year, running used to be neglected. I can say, the running preparation was pretty much unorganized.

After the formation of our Baroda Road Runners group in 2012 (thanks to Ziyaad Ginwala) the activities became more periodic and coordinated. The thrill of running along with established runners (who had graduated to FMs by then) was a major pull factor. After running HM till 2013 (total 7 for me in 3 years) – most of us felt it was time to graduate into the FMs and many trained for it. By 2013 cycling had also picked up in Baroda and I was deeply involved with it as well completing the SR within 8 months of starting cycling. After running 2 of the Mumbai FMs & a few more HMs till 2015 that included interacting with runners nationwide, I realized that my approach to running was more madness than method. I can safely say it was a #MeToo approach by everyone including myself, not knowing that it is important to prepare your body for running before engaging full time into recreational endurance sports.

Since 2015, I cut down my running to concentrate on shorter distances of not more than 5 kms, engaged more into cross training and pursued athletics. Only lately in 2018 I have begun to again take interest in HMs and could compete one in sun 1:45. I believe it is more important to understand your body by engaging it in various forms of exercises, be it yoga, gym, swimming, running or cycling than just participating in events. To better your ability in any exercise gives me more satisfaction just running in events or achieving some pb’s.

SF: How has running transformed in the last decade among the fitness enthusiasts of the country?

SG: Every runner who has experienced the joy of running will feel that it is LIBERATING. Add camaraderie and then you make friends for life. This exactly happened everywhere in the first phase when one ends up discovering many facets of running. The next phase follows bettering your timings when it starts to get more technical and information oriented. Some engage coaches, others put in mileages and many use the self-help way. In this phase the chances of picking up injuries is maximum. The third phase is realizing your true potential and ability that helps you benchmark some realistic goals.

These three phases happened over a decade for the first generation runners. Nowadays due to fitness consciousness and infiltration of commerce (sponsors, coaching, accessories, sports diets and medicine etc) the phase development is fast tracked to almost couple of years. This is too quick for a sedentary body to adapt which leads to picking up niggles & injuries.

On the positive side, there are many experienced runners now who share their understanding / knowledge. Coupled with other activities such as Duathlons, Cycling brevets and Triathlons etc., the runner is exposed to many disciplines that removes the monotony of only running related training. Overall one can safely say that the transformation has been positive for fitness enthusiasts in the country if one trains cautiously avoiding the excesses of quick graduation to speedier races and longer runs.

SF: With the advent of social media, right now runners are deluged with informations, what would be your advice on selection of the right information?

SG: In all spheres of life today we have to deal with information overload. It is up to us to differentiate between useful and trash. One must always remember that the online articles are a result of commerce. Someone is making money on your ‘clicks’. Too much of information can lead to confusion. Therefore it is always best to engage with an informed person to bounce off your experiences with him or her.

What is true for me would not be true to the other person’s body composition. Dietary habits, lifestyle and genetics also plays a role. As is rightly said by experienced runners – make your body fit to run first; only then running will make your body fit.

In short, the path to improvement is long and hard. The key is to learn what works for you and what doesn’t. It will be experiments in the initial years. So always give time. I will always suggest new runners to focus on improving strength and flexibility than just engage in more running. Allow yourself to know your body so you know what works best for you – be it training or dietary habits.

SF: There is lot of misconception also regarding running, we have seen that new runners tend to overrun in excitement but then get depressed with an injury, what is you take on this?

SG: I answered this previously so will not repeat. The major misconception about running is that it is bad for your knees and feet. It certainly is not – provided you have invested your time in strengthening your limbs and the core. Seeking to graduate to longer distances quickly – within a year (social media pressure??) adds to the woes. It is recommended to spend more time in drills than just mindless running.

SF: What is your view on body posture for running, we have seen that most of the runners run with a wrong body posture, how much that impacts in the longer run?

SG: There is enough online material on the right stance and running posture but it should not be done at the expense of altering your natural running rhythm. We run the way we are created by nature. Once our body is strong and run ready only then correct any flaws to the posture if needed. Engage an expert to evaluate tour running form. Most often it is because of a weak core that leads to improper running form. A defective running form leads to inefficient running that tires one quicker leading to unacceptable results in longer running events.

SF: Tell us something about your diet, is it true that for maintaining a fit body, it is 65% diet and 35% workout?

SG: Am not a diet person nor have knowledge of any such ratios. But I do believe in correct replenishments. Most of us are recreational runners and not training for creating world records. We have a family to support and earn our livelihood. Running and its training is for fitness and bettering our ability. Hence one has to continue with home food keeping check on sugar, fats and spice intake.

If one is engaged in strenuous workouts then there has to be compensatory replenishments immediately. Typically a BMI is a good index of your weight. It always helps to get to your ideal weight first by engaging in diet control along with cardio activities. Having early light dinner is highly recommended and it should be at least 3 hours prior to your bed time. After the age of 40, do conduct regular health checks, especially for any deficiency in minerals and vitamins. These are the engines on which your body functions and with increasing endurance activity, one loses these quickly. So supplements are recommended in addition to your home cooked food.

SF: Sam I have seen that when individuals take to running first, they tend to overdo as if there is no tomorrow, what is your view about this?

SG: They are better warned first by their near & dear ones. But if they continue then they are fools who deserve that irreversible injury. More often than not it is the social (media) pressure and one-upmanship that leads to such acts. One can only pity such folks who are putting their limbs to risk as if it is a machine and like there is no tomorrow.

SF: A runner of your caliber should always give some wisdom thoughts, runners reading this will be surely enlightened …..

SG: “A better runner is always the humblest!!”